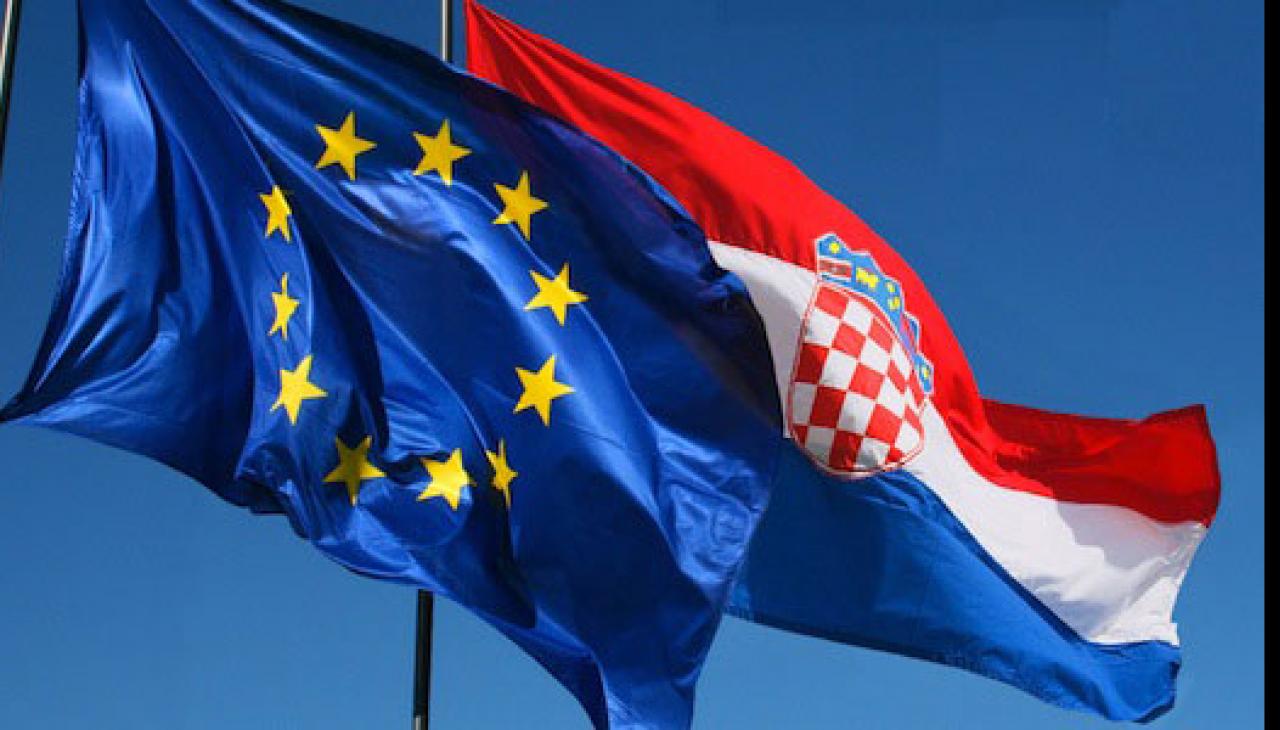 MIDDLE AGES
According to the work De Administrando Imperio written by the 10th-century Byzantine Emperor Constantine VII, the Croats had arrived in what is today Croatia in the early 7th century, however that claim is disputed and competing hypotheses date the event between the 6th and the 9th centuries. Eventually two dukedoms were formed—Duchy of Pannonia and Duchy of Dalmatia, ruled by Ljudevit Posavski and Borna, as attested by chronicles of Einhard starting in 818. The record represents the first document of Croatian realms, vassal states of Francia at the time.
The Frankish overlordship ended during the reign of Mislav two decades later. According to the Constantine VII Christianization of Croats began in the 7th century, but the claim is disputed and generally Christianization is associated with the 9th century. The first native Croatian ruler recognised by the Pope was duke Branimir, whom Pope John VIII referred to as Dux Croatorum (Duke of Croats) in 879.

Tomislav was the first ruler of Croatia who was styled a king in a letter from the Pope John X, dating kingdom of Croatia to year 925. Tomislav defeated Hungarian and Bulgarian invasions, spreading the influence of Croatian kings. The medieval Croatian kingdom reached its peak in the 11th century during the reigns of Petar Krešimir IV (1058–1074) and Dmitar Zvonimir (1075–1089). When Stjepan II died in 1091 ending the Trpimirović dynasty, Ladislaus I of Hungary claimed Croatian crown. Opposition to the claim led to a war and personal union of Croatia and Hungary in 1102, ruled by Coloman.

For the next four centuries, the Kingdom of Croatia was ruled by the Sabor (parliament) and a Ban (viceroy) appointed by the king.The period saw increasing threat of Ottoman conquest and struggle against the Republic of Venice for control of coastal areas. The Venetians gained control over most of Dalmatia by 1428, with exception of the city-state of Dubrovnik which became independent. Ottoman conquests led to the 1493 Battle of Krbava field and 1526 Battle of Mohács, both ending in decisive Ottoman victories. King Louis II died at Mohács, and in 1527, the Croatian Parliament met in Cetin and chose Ferdinand I of the House of Habsburg as new ruler of Croatia, under the condition that he provide protection to Croatia against the Ottoman Empire while respecting its political rights. This period saw the rise of influential nobility such as the Frankopan and Zrinski families to prominence and ultimately numerous Bans from the two families. In practice Croatia was a free and independent kingdom only from 910 till 1102

15. - 18. CENTURY
Following the decisive Ottoman victories, Croatia was split into civilian and military territories, with the partition formed in 1538. The military territories would become known as the Croatian Military Frontier and were under direct Imperial control. Ottoman advances in the Croatian territory continued until the 1593 Battle of Sisak, the first decisive Ottoman defeat, and stabilisation of borders.

The 1830s and 1840s saw romantic nationalism inspire the Croatian National Revival, a political and cultural campaign advocating the unity of all South Slavs in the empire. Its primary focus was the establishment of a standard language as a counterweight to Hungarian, along with the promotion of Croatian literature and culture. During the Hungarian Revolution of 1848 Croatia sided with the Austrians, Ban Josip Jelačić helping defeat the Hungarian forces in 1849, and ushering a period of Germanization policy.

By the 1860s, failure of the policy became apparent, leading to the Austro-Hungarian Compromise of 1867 and creation of a personal union between the crowns of the Austrian Empire and the Kingdom of Hungary. The treaty left the issue of Croatia's status to Hungary, and the status was resolved by the Croatian–Hungarian Settlement of 1868, when kingdoms of Croatia and Slavonia were united. The Kingdom of Dalmatia remained under de facto Austrian control, while Rijeka retained the status of Corpus separatum introduced in 1779.

YUGOSLAVIA
On 29 October 1918 the Croatian Sabor declared independence and decided to join the newly formed State of Slovenes, Croats and Serbs, which in turn entered into union with the Kingdom of Serbia on 4 December 1918 to form the Kingdom of Serbs, Croats, and Slovenes.

In April 1941, Yugoslavia was occupied by Germany and Italy. Following the invasion the territory, parts of Croatia, Bosnia and Herzegovina, and the region of Syrmia were incorporated into the Independent State of Croatia (NDH), a Nazi-backed puppet state.

After the World War II, Croatia became a single-party Socialist federal unit of the SFR Yugoslavia, ruled by the Communists, but enjoying a degree of autonomy within the federation. In 1967, Croatian authors and linguists published a Declaration on the Status and Name of the Croatian Standard Language demanding greater autonomy for Croatian language.

In the 1980s the political situation in Yugoslavia deteriorated with national tension fanned by the 1986 Serbian SANU Memorandum and the 1989 coups in Vojvodina, Kosovo and Montenegro. In January 1990, the Communist Party fragmented along national lines, with the Croatian faction demanding a looser federation. In the same year, the first multi-party elections were held in Croatia, with Franjo Tuđman's win raising nationalist tensions further. Serbs in Croatia left Sabor and declared the autonomy of areas that would soon become the unrecognised Republic of Serbian Krajina, intent on achieving independence from Croatia.

INDEPENDENT CROATIA
As tensions rose, Croatia declared independence in June 1991, however the declaration came into effect on 8 October 1991. In the meantime, tensions escalated into the Croatian War of Independence when the Yugoslav National Army and various Serb paramilitaries attacked Croatia. By the end of 1991, a high intensity war fought along a wide front reduced Croatia to control of about two-thirds of its territory. On 15 January 1992, Croatia gained diplomatic recognition by the European Economic Community members, and subsequently the United Nations. The war effectively ended in 1995 with a decisive victory by Croatia in August 1995. The remaining occupied areas were restored to Croatia pursuant to the Erdut Agreement of November 1995, with the process concluded in January 1998. Croatia became a World Trade Organization (WTO) member on 30 November 2000. The country signed a Stabilization and Association Agreement (SAA) with the European Union in October 2001. Croatia became member of NATO on 1 April 2009, and joined the European Union on 1 July 2013.