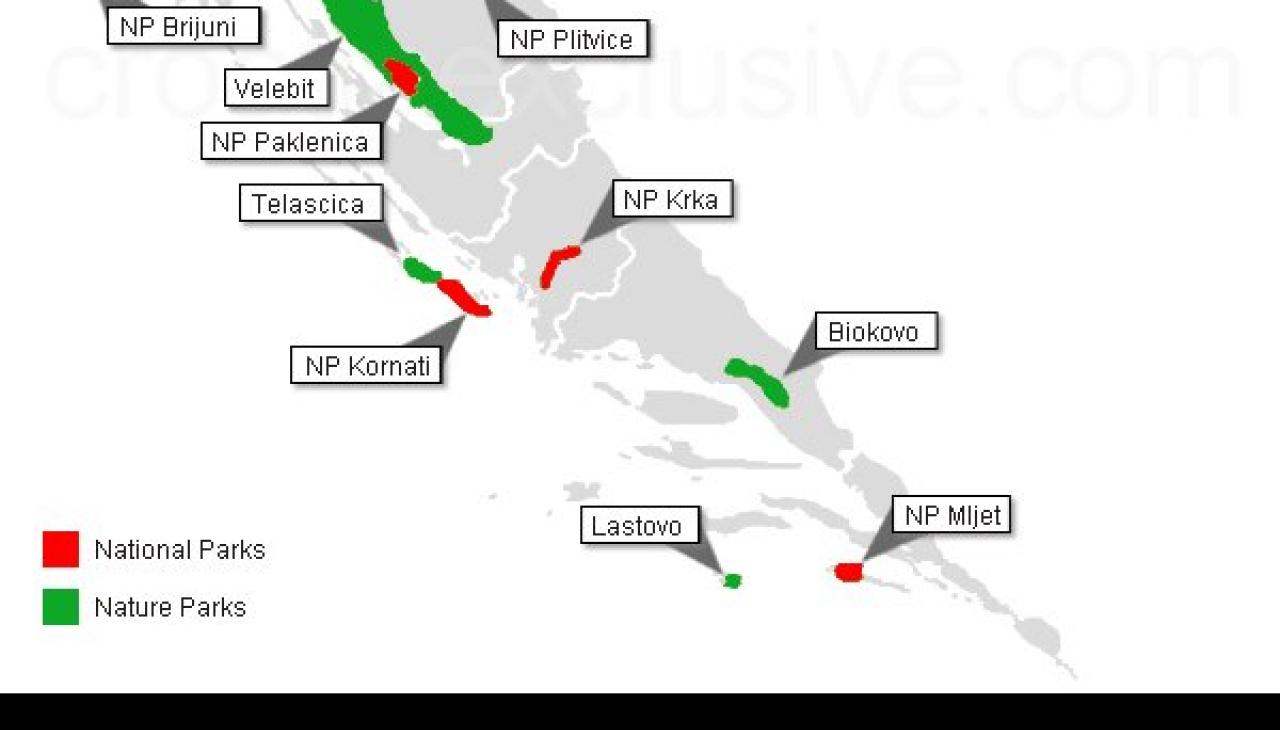 Croatia safeguards her natural treasures in eight national parks, of which Plitvice Lakes are also protected by UNESCO. The magic of waterfalls awaits on the Krka river also, and spring-rich mountains at Risnjak. Up on Croatia's biggest mountain are the North Velebit and Paklenica national parks. Enchanting seascapes abound at the Brijuni and Kornati national parks, and an unusual lake and island combination describes the most southerly national park, Mljet.

Croatia among the droplets of eternal waterfalls

The Plitvice Lakes national park, the UNESCO-protected Croatian natural heritage, awaits from a soaring height of over 200 feet for its tallest waterfall. Springled with the spray of the Grand fall, continue your tour of the sixteen lakes which are interlinked by numerous waterfalls. Wooden walkways take you along the very surface of the lakes, the largest of which can be crossed by a boat.

The Krka national park breaks the stately silence of the forest with the noise made by the waterfalls crossing the seven travertine barriers along its eponymous river. Slender wooden bridges will bring you within a hand's breadth of the translucent falls which, at the longest barrier – Skradinski buk – cascade over as many as seventeen travertine stairs. A boat can take you to the Visovac island, cared for by the franciscan monks since the fifteenth century.

The Risnjak national park will mesmerize you by the turquoise glow of the Kupa river's springs. The valley which originates at this place is home to as many as sixty-nine species of butterfly. Climbers' paths lead to Risnjak peak (5013 ft), and a view of countless lesser peaks surrounding it from all sides.

The North Velebit national park wins the visitor over with mountainous landscapes of green meadows, imposing stone and lush forests, which all trade places along a 10-mile-long trekking path. The most elevated botanical garden Croatia has ever planted, at 4855 feet above sea level, is home to Croatia's rarest plant – the degenia.

The Paklenica national park is the beauty queen of the south of Croatia's tallest mountain, Velebit. The Velika (Big) Paklenica canyon offers a mountaineering challenge on the world-famous cliffs. Its trails lead to eighty-thousand-year-old decorations inside the Manita peć cave.

Croatia in a rhapsody of colorful islands

The Brijuni national park with its fourteen islands will take you through a colorful patchwork of its safari park, the trademark of which is the endangered autochtonous donkey. The Brijuni archipelago surprisingly also features a journey into the distant past, as it is home to over two hundred dinosaur footprints.

The Kornati national park invites you to a cruise on its crystal waters, which find their way amongst eighty-nine denuded islands and reefs. A stunning sight of scattered islets is well complemented by a diving expedition, where a chief attraction will be the white cliffs known as crowns.

The best way to acquaint yourself with the Mljet national park is a stroll along the two saltwater lakes, surrounded by pristine Mediterranean vegetation. The Lesser lake has made a lagoon ideal for swimming, while the islet in the midst of the Greater lake hides a monastery which has become a recognizably symbol of Mljet, Croatia's most forested island.