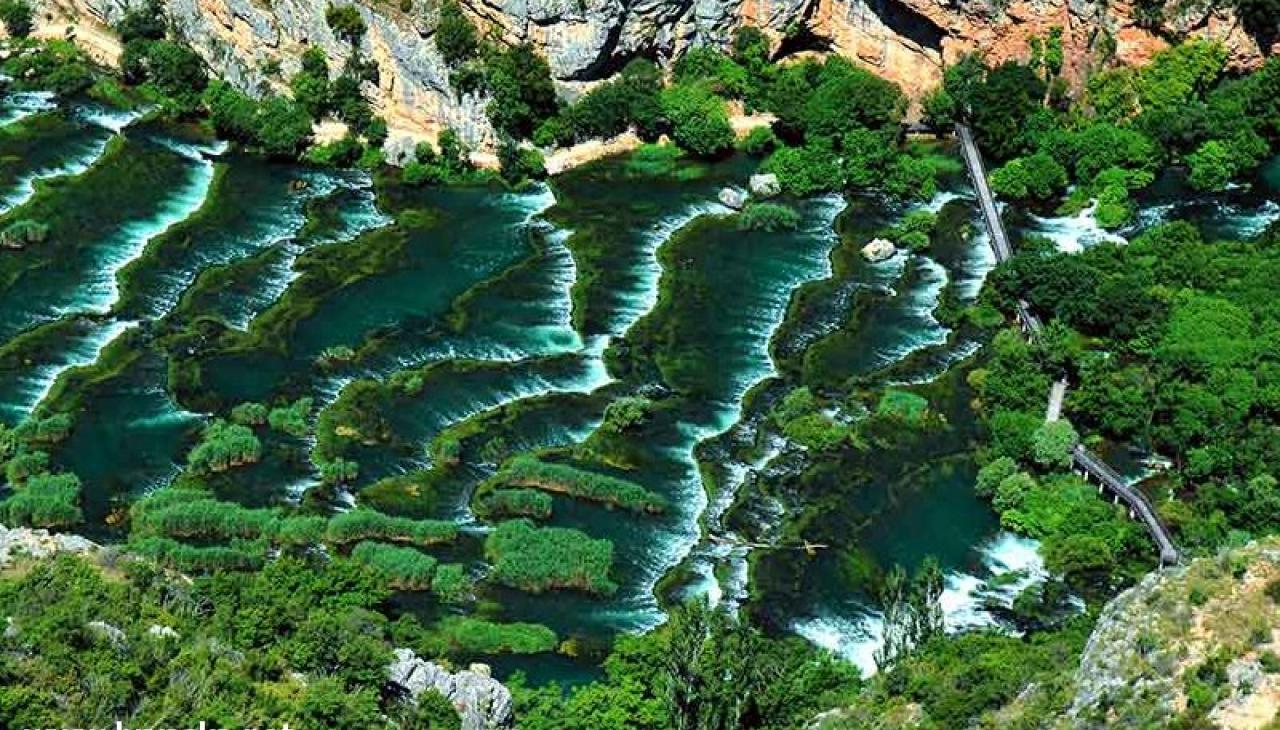 Sibenik has an excellent location for numerous trips. If you stay in the vicinity, we recommend trips - worth a visit:

This unique example of European sacred architecture has been added to the UNESCO World Heritage List. Adorned with a frieze of 72 heads carved in stone, it is Croatia’s most significant architectural creation of the fifteenth and sixteenth centuries.

With its seven travertine waterfalls at a total height of 242 metres and the Skradinski Buk, the largest travertine barrier in Europe, the Krka National Park is a natural and karstic phenomenon. The island of Visovac with its Franciscan church and monastery is also worth visiting.

The second day you can see the small island of Visovac with a church and a Franciscan monastery and the Roški waterfall with Oziđana pećina (here, they have found the remains of prehistoric people - you must use 517 steps).
This middle part of the river Krka can also be reached with organized tours from the village of Lozovac. you have two trips. First approx. 2 hours to the island of Visovac, or 3.5 hours tour to Roski waterfall (price approx. 30 EUR /adult/person).
- Island Visovac
Small island with a beautiful church. Visovac Island is among Croatia's most valuable natural and cultural values. The Franciscan Monastery of Our Lady of Mercy and the Church of Our Lady of Visovac have stood here since 1445. The complex, together with the beautiful landscape of Visovac. The island can also be reached from the nearby harbor - boat ride costs about 7 € / adult / per person)

- Roski waterfall
Waterfall height of 15 m, in the vicinity are located a pair of beautifully renovated mills.

Third day You can see the monastery Krka (Krka Monastery) Manjolovači waterfall, and archaeological remains of the Roman camp Brunum.
- Krka Monastery
The Krka Monastery (Holy Archangel), the spiritual centre of the Orthodox faith, stands 3.5 kilometres east of Kistanje, in a bay on the Krka River. Erected on the foundations of an earlier Eremite monastery, it was first mentioned in the written records.

- the Manojlovac waterfall is found along the road Knin - Kistanje.
This is the third waterfall in the series, the tallest and considered by many to be the loveliest waterfall on the Krka River. The waterfall consists of a series of travertine barriers, with a total height of 59.6 m. The largest barrier is 32.2 m high.

- Archaeological locality Brunum. Roman military camp - the pearl of ancient history. It is built on the area where it was possible to control passage over the river Krka. In Brunum XI Roman legion was sattled.

Kornati consists of 89 uninhabited islands, islets and rocks in an area of ??only seventy square kilometres. Due to the dangers of navigating through this maze of rocks, the Kornati feature many old lighthouses and islands such as Blitvenica and Sestrice, which are nowadays a destination for adventure-seeking travellers.

Visit is recommended to anyone who would like to establish a first contact with the birds of prey. At the center there are cca. 15 birds of prey (owls, hawks, eagles). The presentation was phenomenal during our visit and each of us had a chance, how it is to have an eagle on your arm. We recommend that you announce you visit so that they can take time for you.
Contact:
+385 (0) 91 506 7610
Škugor bb, 22000 Sibenik

Accommodation in the vicinity:

Solaris Resort is composed of: